– How did you find out that you are a good man?
– Good man? Others told me and I quickly agreed!

The 29th of April is the birthday of Valentin Podpomogov, an art director, painter, actor, operator and honored artist of the Armenian SSR. Recently there was a memorable evening devoted to Podpomogov’s 90th anniversary, which was entitled Road to Self, conducted by his wife Asya Podpomogova. Almost all of his friends were present at the evening and shared with their memories about the artist.

Valentine was born and lived in Armenia. He had a Polish-Ukrainian father and his mother was Armenian. But Valentin or “Valya” or “Valushka” as his friends called him, considered himself first and foremost a refined Armenian.

“I swear on Armenian, therefor it is my native language!” These are Podpomogov’s words. People called him the “salt of Armenia.” “Podpomogov pathologically loved Yerevan,” said one of his young friends.

According to Asya Podpomogova, Valentin did not study anywhere. In fact, he did not even complete in a school program. “He even boasts of how he was kept back in fourth grade for an extra year, before, to his relief, he was expelled. Since then he never misses a chance of telling people that he has a fourth grade education.”2 But surprisingly he knew everything. He was comprehensively talented and clearly saw the way he was going to pass.

As a child, Valentin was hired at Armenfilm Studio, further becoming an art director. Film and animation were his passion. He seemed to be one of those who reanimated Armenian animation art in the 1960s. Many famous and lovely animated films can be credited to his talent (such as 1968’s A Drop of Honey). Podpomogov also enjoyed acting too and even acted in some films, such as A Man from Olympus from 1974 and The Men from 1972.

Podpomogov started to paint later, at the age of 50. And everybody will agree – he is a genius. Actually, Valya had a very cheerful and buoyant nature which made him attractive to countless people – painters, actors, journalists, singers, filmmakers etc. “The whole Yerevan made friend with him,” said his wife. And what is interesting is that Podpomogov painted very serious, deep philosophical, and thought-provoking pictures. Every painting is a separate subject to think about. And his images, in fact, contradicted his nature. 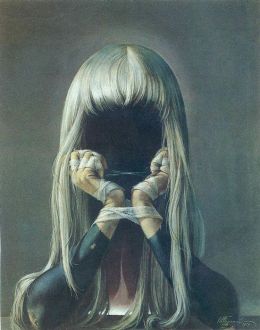 One of his paintings, Nostalgia, which he actually designated as a self-portrait, shocked Yerevan: it depicted painted an old bored monkey on a chain.

If to be more careful we can see that candle plays a big role in his art. In almost all his pictures, a candle is present.

With Dalí-esque surrealism, his paintings are special, meaningful and philosophical. Each is about something different.

One of his most fascinating paintings is called The Bard. Its subject is the renown Russian folk artist Vladimir Vysotsky (the “Bob Dylan of the USSR”). In his work, he presented legendary poet-singer in the guise of a constrained man without arms. The powerful image implied Soviet pressure on the artist’s freedom.

According to Asya Podpomogova, Valentin painted his own hands in his pictures. And what is interesting, after signing on the canvas his relation with his paintings was interrupted. Now Podpomogov’s paintings are exhibited at the Museum of Modern Art in Yerevan.

Valentin Podpomogov died on July 18, 1998. Here is a fascinating Russian-language documentary film by Nikolay Davtyan perfectly representing everything about Valya: