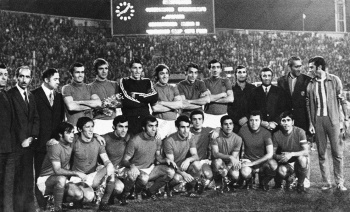 40 years ago today in 1973, history was made in Armenian soccer/football.

On that day, in the Luzhniki Stadium in Moscow, the Armenian football team Ararat smashed one of the strongest teams in the entire USSR – Dynamo Kiev from Ukraine.

The monumental victory, achieved under the leadership of coach Nikita Simonyan, is considered by many to be one of the greatest moments in Armenian soccer/football history.

You can read more information about it on ArmeniaNow here and watch footage of the historic 1973 victory below!: