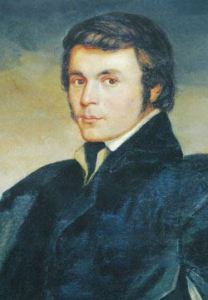 The Abovyan Group is an online publication based in the city of Cleveland in the United States. Launched in September 2013, our primary aim is to promote knowledge on the history, culture, politics, and literature of Russian, Soviet, and post-Soviet Armenia and the Caucasus in the English language. It is co-authored by a team of five primary contributors from different academic disciplines with occasional articles from guest contributors. We are also affiliated with the Gomidas Institute in London.  You can also check us out on our Facebook page here.

The publication derives its name from the great 19th century writer Khachatur Abovyan. Born to a noble family in the Armenian village of Kanaker (now a neighborhood of Yerevan), Abovyan was the first Armenian writer to write in the local Armenian vernacular, as opposed to the Classical Armenian or grabar, as favored by the Armenian Apostolic Church. In addition, Abovyan was a tireless advocate for education and literacy among the Armenians and was also a friend of the Yazidi Kurdish community.  He also participated in Dr. Friedrich Parrot’s expedition to Mount Ararat, the first such expedition in modern human history.  After reaching the top of the mountain, Abovyan placed a wooden cross upon its crest.  Parrot later published his account of the ascent, Journey to Ararat.  A critical edition of the English translation of the work was later republished by the Gomidas Institute in 2016.