Official logo for the 2014 Sochi Olympics

The 2014 Sochi Oympics in Russia are due to start just a week from this Friday. Yet, when I was in Yerevan recently, I was somewhat surprised to see a total absence of discussion on the upcoming games. After all, Yerevan is located only 500 miles away from Sochi. Would not the Armenians stand to benefit from having the Olympics right in their own Caucasus neighborhood? And what of the Georgians and the Abkhaz too? The Georgian capital Tbilisi is located only 357 miles away from Sochi, while Sukhumi, the capital of breakaway Abkhazia, is located only a mere 88 miles away. Surely would not they potentially benefit from the Olympics as well? Unfortunately, the promises of a regional collaboration that would bring about such benefits are largely a moot point. This commentary explores the reasons behind this. 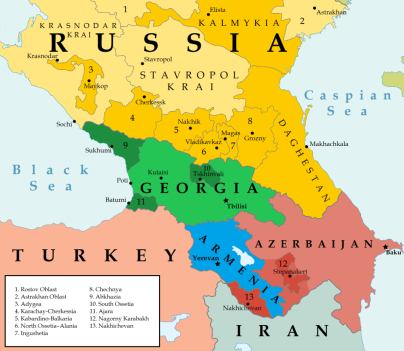 Map of the Caucasus Region, January 2014

A major resort on Russia’s Black Sea coast, Sochi is home to a large multiethnic population consisting of Russians, Armenians, Ukrainians, Georgians, Adyghes, and others. The city is a veritable “gateway” to the Caucasus region, providing easy access to both the North and South Caucasus. The decision by Russian President Vladimir Putin to hold the Winter Olympics in Sochi was likely conditioned by this geography. There are many other cities in Russia that might have been better qualified to hold the games. Sochi sits in a subtropical climate zone and so the choice at first glance appears a bit odd. However, for a Russian President with an interest in stabilizing a region plagued by conflict and division, the Black Sea resort seems to be the perfect choice. Indeed, from Chechnya to Georgia, the region has occupied a central position in the Russian political discourse under Putin, arguably more so than under any Russian leader since the 19th century.

In Russia, the Sochi Olympics are viewed as a means of highlighting the country on the world stage. However, for the nearby local peoples of the Caucasus, the Olympic dream remains a distant one. Had the geopolitical circumstances been different, nearby Georgia and its breakaway region of Abkhazia might too have basked in the glow of Olympic celebrity. Unfortunately, the ongoing conflict divides these two peoples.  Though Georgia has recently offered to help Russia with security for Sochi, Moscow’s recognition and support for Abkhazia (as well as the legacy of the 2008 war) have encouraged a debate within Georgia on whether or not to even attend the games. The Abkhaz for their part, despite their close relationship with Russia, have been unable to compete under their national flag and have been effectively shut out by a border closed by Moscow in order to prevent any security issues.  Additionally, Moscow later controversially expanded the temporary Sochi Olympic security zone 11 kilometers into Abkhazia’s northern Gagra district.  The move was done with Abkhazia’s consent but without Georgia’s.  On January 22, Georgian President Giorgi Margvelashvili voiced his concern about this issue.

UN Map of Abkhazia with the Abkhazian railway, 2014.

Also closed is the Soviet-era railway that once connected Sochi with Abkhazia, Georgia proper, and eventually Armenia. In disuse since Abkhazia seceded from Georgia in the 1990s, the defunct railway seems to represent everything wrong with the region. The effects are this are most tragically seen in Armenia. During Soviet times, this was a country from which locals would travel by train to vacation in Sukhumi, Gagra, Sochi and other celebrated spas and resorts. A large and historic Armenian community also lives in Sochi, forming about 20% of the total population (see the 2010 census data here).

However, since the secession of Abkhazia in the 1990s and the closure of the railway, the visits have stopped. Economically, the closure also hurt Armenia, which is still suffering from a blockade imposed by Turkey and Azerbaijan over the Nagorny Karabakh conflict. Consequently, Armenians today feel as distant from the Sochi games as ever. In Yerevan, there are no signs of any major upcoming sporting events in the Caucasus. “There is no difference for us,” I was frequently told. “From our perspective, the games might as well be held in France or Germany.”

The previous Georgian government of Mikheil Saakhasvili categorically opposed the idea of reopening the railway link, claiming that it would be tantamount to recognizing the Abkhazian rebels. However, the now-ruling Georgian Dream coalition government argues it would represent a major confidence building-measure toward the Abkhaz. 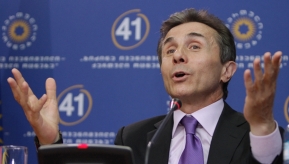 In late 2012, former Georgian Prime Minister Bidzina Ivanishvili announced his support for reopening the railway. The Armenian government immediately responded enthusiastically. The Abkhaz, for their part, were more cautious. Since this time, however, virtually no progress as been made, likely due to the fact that Saakhasvili still held the presidential post. His final ouster in the 2013 presidential election ushered in a new atmosphere. The new Georgian President Giorgi Margvelashvili has indicated his readiness for greater dialogue with Abkhazia and raised the prospect of possibly even attending the Sochi games. Notably, 75% of Georgians in an August 2013 poll indicated their support for the opening of the railway. In the Summer of 2013, Paata Zakareishvili, Georgia’s minister for reconciliation with its breakaway regions notably stated:

Everyone could use this railway – Russia, Georgia and Armenia. It would enhance our country’s role as a transport artery, and increase its geopolitical importance. Goods would move not just west-east, but also north-south.

Indeed, for Sochi alone, an open Abkhazian railway could have made not only the Russians but also the Georgians, Abkhaz, and Armenians recipients of massive Olympic-style benefits. Tourists could have been enticed to visit the ancient, historical sites of these proud Caucasus nations. The potential benefits from tourism and investment would have been enormous. However, despite the positive steps discussed above, the process toward the reopening of the Abkhazian railway will be a long one and will certainly not be accomplished before the Sochi games next week. Political will and courage are needed to overcome the barriers, build confidence, and to ensure that such opportunities are not missed again.